Air cargo’s importance to the UK is not being overlooked, according to the Freight Transport Association (FTA), which praised the government for today’s launch of an aviation strategy consultation.

Secretary of state for transport Chris Grayling said a strong aviation sector was vital for building a “truly global” Britain.

“This is an industry that contributes billions to our economy, supports thousands of jobs, strengthens the union and develops skills,” he said.

“Now, as we leave the European Union, it is more important than ever that we build on this success… a thriving aviation sector will be central to our future prosperity.”

The report shows £160bn worth of cargo was carried by air between the UK and non-EU countries in 2015, with air freight the only mode of transport where the country’s exports exceeded imports.

The report says the consultation will look at specific obstacles that may be faced by the air freight industry and identify how the government could help it grow.

“Goods shipped by air freight tend to be of a high value, such as pharmaceuticals, bespoke or high-quality manufactured goods and fresh food,” it says.

“Heathrow handles 65% of our air freight, and its importance to the air freight market and potential for growth, was an important argument for supporting the proposed expansion there.”

Responding to the report, the FTA noted one of the DfT’s aims was to gain evidence from stakeholders on global connections, which the FTA noted was of “huge” relevance to freight.

Head of air cargo policy at the FTA Alex Veitch said he was “delighted” to see the key role of the air cargo sector recognised in the consultation paper.

“Air represented over 40% of the UK’s extra-EU trade by value in 2015 and this shows the importance of aviation to our global trade. The report also acknowledges the importance of Heathrow to the air freight market, and its potential for growth was an important argument for supporting the proposed expansion there.”

“The UK should be top of the league for international trade in all sectors – including air cargo – but is currently languishing mid-table,” said Mr Veitch.

“The document is refreshingly transparent about the scale of the challenge to improve the position of air freight; we look forward to working with the government to find ways to improve it.”

Mr Veitch also said he was “pleased” to see ministers were already noting the implications of Brexit for the air freight trade and had underlined it as a priority.

“As the paper states, alternative arrangements will be required for air services to or from the 44 countries (EU and non-EU) where market access is via EU-negotiated agreements,” he added.

“New arrangements have been identified by the government as a top Brexit priority.” 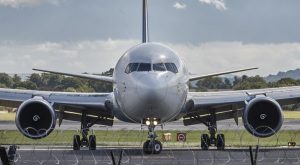 @SandfordFreight
AEO approved Freight Forwarder based at Heathrow Airport. Import/Exporting all over the world by air, road & sea. For quotations email: quotes@sandforduk.com
Important Update on China to UK Traffic via Ocean Freight

Because these cookies are strictly necessary to deliver the website, refusing them will have impact how our site functions. You always can block or delete cookies by changing your browser settings and force blocking all cookies on this website. But this will always prompt you to accept/refuse cookies when revisiting our site.